The US dollar is trading at its weakest against the Canadian dollar since mid-November, due to rising oil prices towards $90.00 and a record high CPI inflation report from Canada on Wednesday.

At present, the USDCAD pair is testing critical trendline support below the 1.2500 level, opening the door for further downside if further weakness takes hold below the mentioned trendline.

Momentum is to the downside, especially since yesterday’s year-on-year CPI number. On a headline basis, CPI prices actually fell -0.1% month-over-month as expected, but the big news was Canada’s annual inflation rate to 4.8%, which rose to its highest level since 1991.

USDCAD traders have taken the month print with a pinch of salt, focusing instead on the general risk appetite in the market and the fact that the price of crude oil, which is Canada’s most important export, now trading at its highest level since October 2014.

This potent combination of oil trading at an 8-year high and CPI at a 30-year high is likely to further pressure the USDCAD pair down under the 1.2500 level. Both the mentioned factors look like they are going to prompt more downside.

Next week’s FED interest rate decision could give some reprieve for the USDCAD pair, however, as things stand we do need to keep a close watch on the 1.2500 support zone.

The USDCAD pair has formed a notable head and shoulders pattern, with the size of this pattern implying that the USDCAD pair could actually drop by a further 300 points.

Do keep a close watch on the 1.2600 area, as this is the neckline of the bullish pattern. Only gains above the neckline can stop more heavy losses in the USDCAD pair. 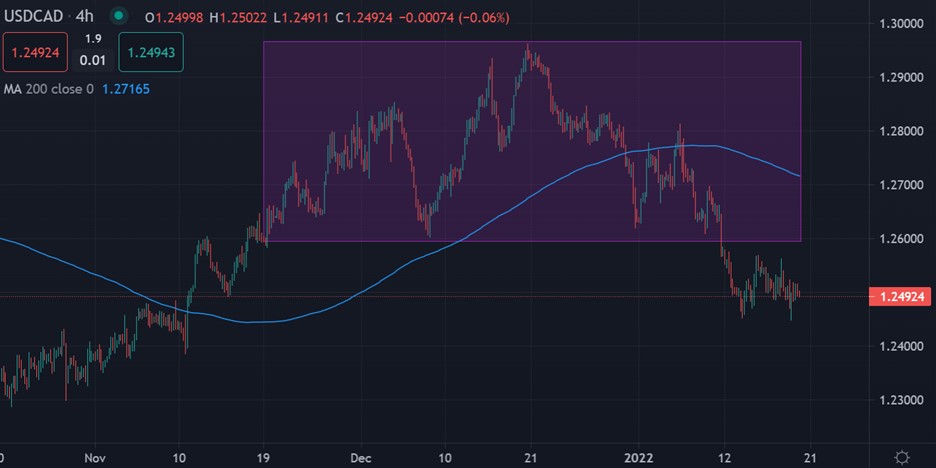 The USDCAD pair is trading at a critical juncture, and is testing huge trendline support, around the 1.2480 handle. This is the key price zone to watch going forward.

A large, inverted head and shoulders pattern has also formed, which continues to foreshadow more gains in the USDCAD pair. A break under 1.2300 would invalidate the pattern.