Flash PMIs bring some volatility to the euro and pound crosses

Thursday is all about the Flash PMIs. The initial readings give the market an idea of how well the different countries manufacturing and service sectors are doing. Later these flash readings are revised and then finalised. Because the flash reading is an early indicator a bit like an exit poll during an election, we do get volatility based on sentiment.

During the overnight session, the Australian manufacturing PMI showed a higher reading than the previously revised reading, but the service PMI showed a lower reading. German flash manufacturing PMI came in much worse than expected, which dragged down the composite reading. The diffusion index came in at 51.3 this month, which indicates a slight expansion since it has been declining for four consecutive months. Anything under 50 is a cause for concern. According to June’s flash PMI data, Germany’s economy has lost virtually all the momentum gained following the easing of virus-related restrictions, with growth in the service sector cooling sharply for the second month in a row. It’s the broad-based decline in demand that is of concern, with a decline in manufacturing new orders coinciding with the first drop in new business in the service sector in six months, as rising prices and elevated levels of uncertainty take their toll. Workloads built up earlier in the year are still enabling some activity. 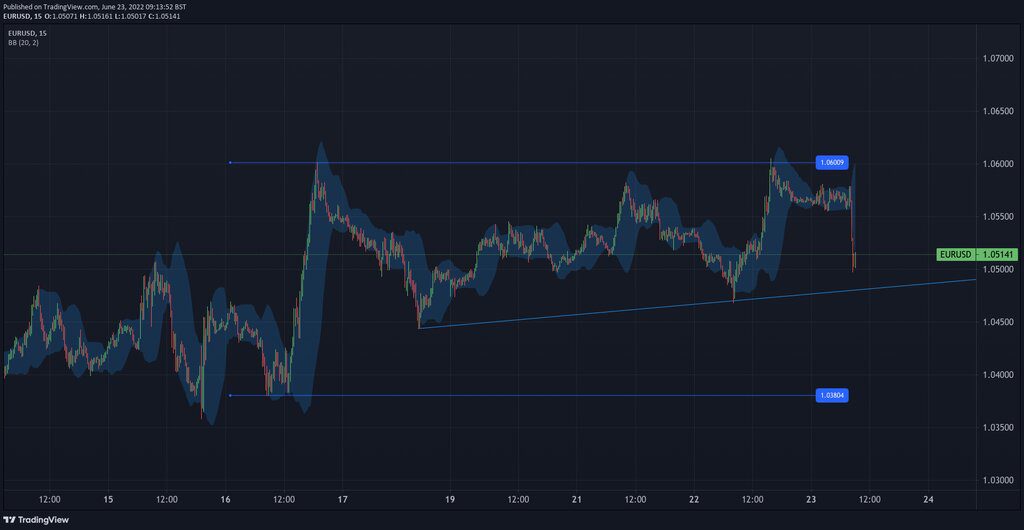 The EURUSD had dropped lower from the European open but then following the PMI release prices levelled out around the 1.0500 support. The day before had pierced through the 1.0600 and at the current levels the June 16th price range are still the levels to watch. 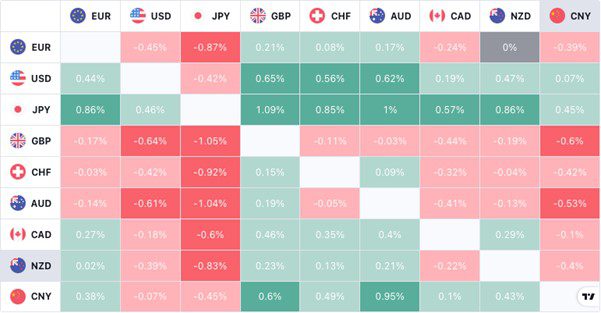 The forex heatmap is showing that the yen and US dollar are appreciating against their peers. The pound is currently the weakest, closely followed by the Aussie and Swiss franc. We have day 2 of Fed Chair Powell’s testimony today where I would expect him to reiterate what has already been said over the last week since the FOMC rate hike. The commodity markets especially are dropping hard as investors begin to seriously worry about an upcoming recession. 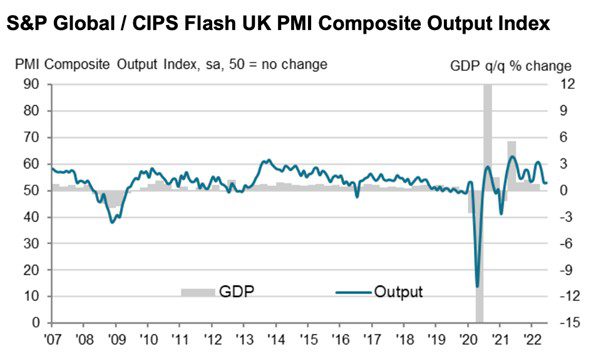 The UK flash composite PMI for June came in above expectations at 53.1 versus 52.6. The previous reading came in at 53.1, so with all the worries around the UK economy, this is a good result for June. Manufacturing dipped a little, but Services came in slightly better than expected. Business confidence has slumped, but business growth is currently being supported by orders placed in the months prior to falling demand. 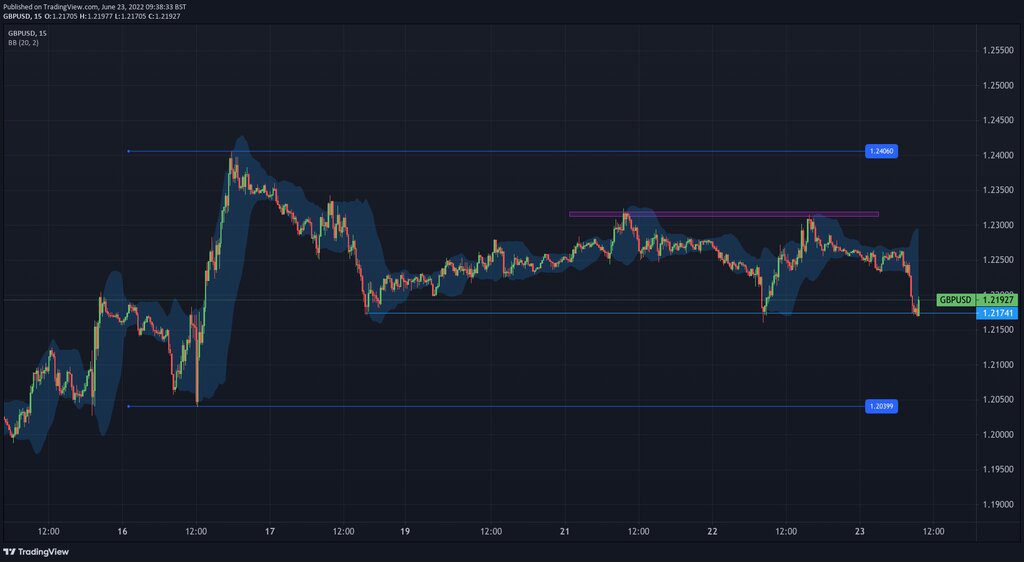 The pound had dropped down to last Fridays lows on the back of the worsening European PMIs and the flows into the US dollar. The bounce that occurred following the UK PMI data release suggests that we could potentially be targeting the 1.2300 level after backfilling the drop from the London open. Above 1.2300 and we’re targeting the June 16th swing high and the 1.2400 level. If we don’t get there before the US PMI release this afternoon and 1.22500 has acted as resistance, I would be wary of initiating any trades until after Fed Chair Powell concludes his testimony. 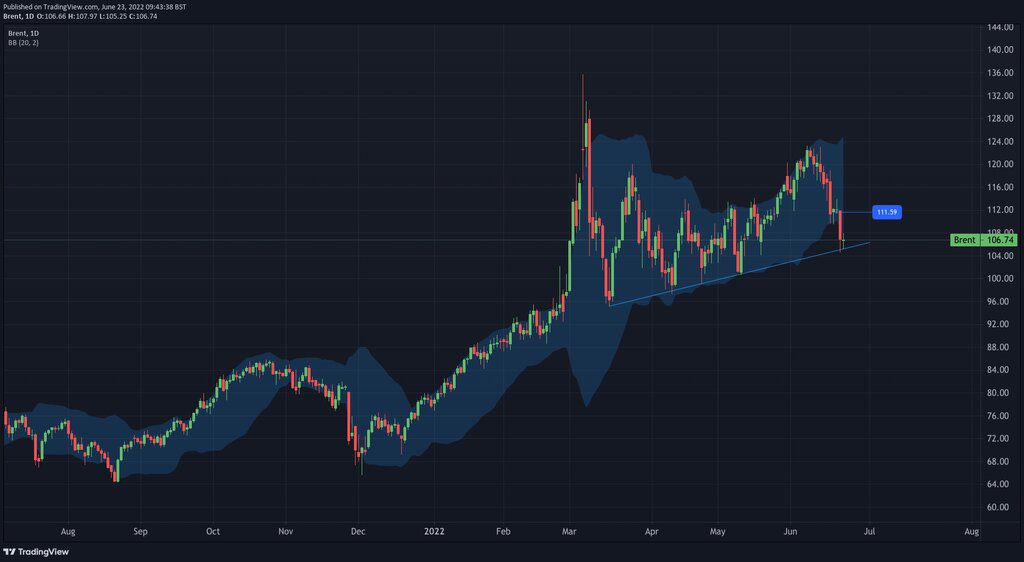 Brent and WTI continue to drop after yesterday’s US crude oil inventories data showed an increase of 5.6 million barrels in the week ending June 17, according to private API data.

The reserves in Cushing, Oklahoma, are said to have declined by 390,000 barrels. In the latest data, gasoline stockpiles increased by 1.2 million barrels whereas distillate inventories fell by 1.7 million barrels. The President of the United States, Joe Biden, urged Congress earlier today to suspend the federal gasoline tax for three months in response to high oil prices. If the global economy slips into a recession, there will be less demand for energy, and we will see the inventories and stockpiles building up. With distillates reportedly down, that shows that there is still economic activity as this part of the report includes diesel used by the trucks and vans shipping goods.

Brent is currently resting on a trend line that had formed a lower bound of a rising channel. A push through the $105 per barrel and I’ll be anticipating a break, retest, and continuation trade towards $100 per barrel. Looking left it would be good if we found resistance at one of the daily swing lows that printed in the run down from the June swing high. $111.50-$111.60 would be ideal, as we could place a stop above the swing high.