The EURGBP pair looks to be trapped in range bound trading activity as the UK central bank raised interest rates aggressively but talked up the chance of a major financial recession.

The sixth consecutive increase from the Bank of England took UK borrowing costs to 1.75% and marks the first half-point hike since the bank was made independent from the British government in 1970.

Accordingly, the bank now expects headline inflation to peak at 13.3% in October and to remain at elevated levels throughout much of 2023, before falling to its 2% target in 2025.

Sterling took a dive, while the euro rose as the Bank’s Committee, the MPC, projected that the UK will enter recession from the fourth quarter of 2022, and that the recession will last five quarters.

The Bank is simultaneously forecasting a long recession starting later this year and an even higher peak in inflation. This is a toxic economic combination, which would be difficult for the central bank to navigate at the best of times, let alone when it is increasingly being dragged into the political spotlight.

According to the technicals a run towards range bound activity between the 0.8200 and 0.8500 levels as the Bank of England and ECB are in a similar boat economically.

The ActivTrader platform shows that bullish sentiment is rising, with some 59 percent of traders now expecting more upside in the EURGBP pair despite the recent price collapse.

Overall, this should be bearish for the EURGBP pair because traders are typically on the wrong side of the trade. Most of the time fading retail sentiment works well for trading purposes.

The four-hour time frame shows that the EURGBP pair is technically bearish over the short-term with the price trading slightly below its key 200-period moving average, around the 0.8504 area.

A head and shoulders pattern has recently formed, and the price is now moving back to the neckline of the pattern. According to the size of the pattern a drop towards the 0.8200 level is still pending. 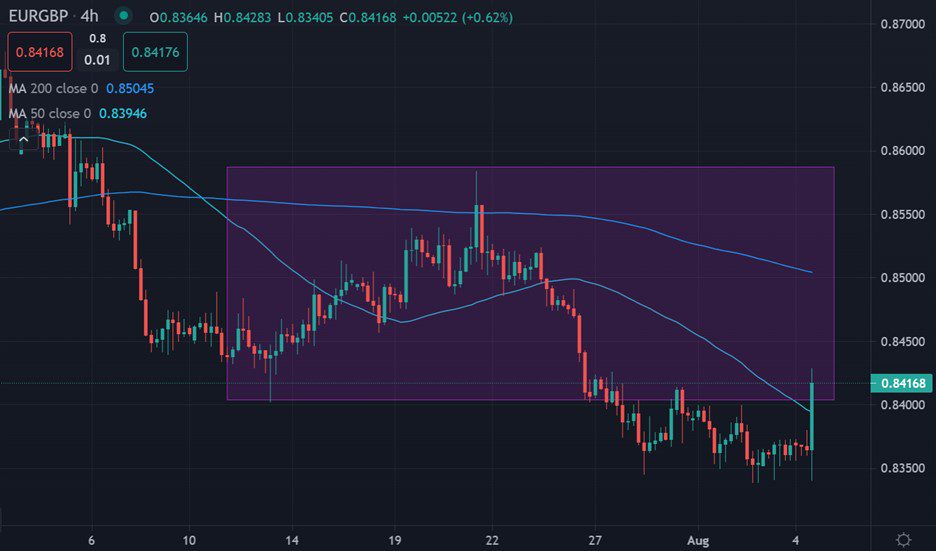 The daily time frame shows that the EURGBP pair is starting to settle back inside a large falling expanding wedge pattern after the recent false breakout above the wedge.

I can also see a large broadening pattern could be pointing to a massive price drop and new low coming over recent months. This would also fit in with the current fundamentals. 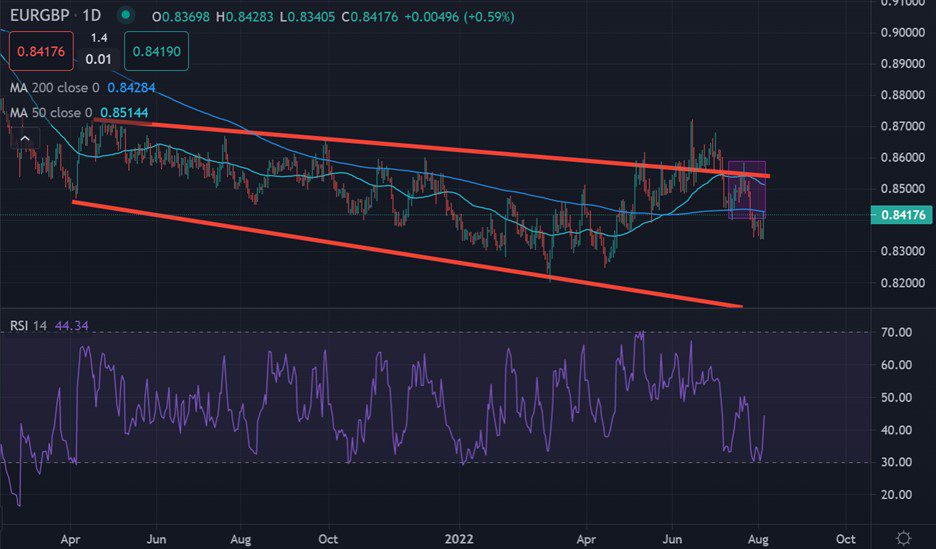